Hope you enjoy this tutorial, if interested please check out my latest project/website. It's an attempt at creating an artificial neural network for predicting stock directions. As always, any feedback is appreciated  www.mspann.com

Now back to the robot...

This simple roaming bot uses an ultrasound sensor to avoid objects in its path...Once assembly is complete, the bot's performance is only limited by your creativity when programming the sketch.  I will include a simple sketch program which gets the bot moving and pings the sonar sensor to determine if objects are in it's path.


Open up the RC car

Now that we have all the parts we will need, lets begin by taking the RC car apart to see what we're working with.  RC car parts will vary but most low end ones will have either 2 DC motors or 1 DC and one Servo motor. The 2 DC motor setup would mean one motor powers the left wheel and one powers the right wheel so you can have the car go forward, back and turns are handled by having one motor forward while the other goes back.   The 1 DC and 1 servo motor setup would work by having 2 tires connected to the DC motor this would control forward and back. The servo motor would then be connected to the steering wheels turning them left or right.

This RC car has 2 DC motors, each connected to one rear wheel.

If you look at the 3rd picture the wires leading from the DC motors of the rear wheels are red and black for the top wheel and white and yellow for the bottom wheel.

Those two shiny metal strips with a screw holding them in place, are the power connected to the battery pack which is directly underneath the metal strips and next to the motors.  This top is negative and the bottom is positive...this car uses 4 AA batteries at 1.5 v each that's a total of 6 v.  That means we will not have enough power for 2 motors and the Arduino board, we will need a secondary power source to supply the Arduino. This will come from your USB cable when plugged into the computer for programming and from the 9 v battery when the bot is disconnected from the USB and out roaming.

We don't need the RC cars controll board, so lets go ahead and clip all the wires connecting to it.

You see that red wire leading into that piece in the middle, that's the on off switch for the RC car. We will use this switch later. 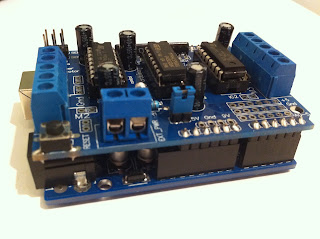 The Arduino and Motor shield are ready for testing.
Connect one of the DC Motor's to the M1 screw pins on the Motor Shield. 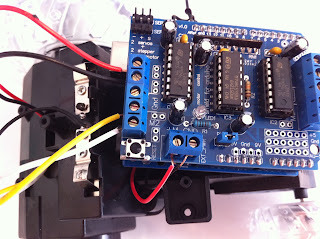 In this picture it's the red and black wires going into the top right 2 screw pins...The top of the board has 5 screw pins, use the top 2 on the right for M1 the top 2 on the left are for M2 (yellow white wires) we will use that later.

Download and install the Motor Shield's library library download
Rename the folder to AFMotor place it along with all sub folders and files in your
My Documents/Arduino /libraries folder.
The Arduino IDE will need to started before the library is recognized, if the IDE is already open, simply quit and re-open.

Use the following code to run your test. This will run the motor forward 1 second, back 1 second and stop 1 second...Then the it will repeat (infinitely).

Once you created your sketch using the code above, connect the Arduino to the PC using the USB cable and upload your sketch.  The code above will begin executing and the motors should begin to run forward, back, stop...repeat.

Now we, want to test the ultrasonic sensor.
You will need to solder 4 jumper cables to the sensor's pins. 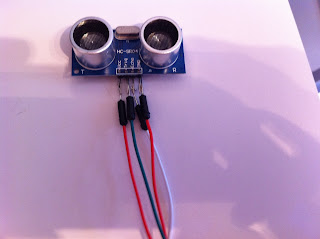 Connect the Sensor's wires to the Arduino Motor shield. 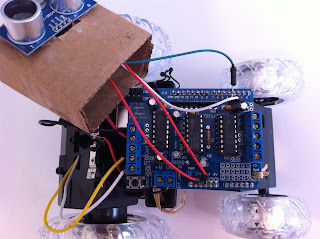 Don't worry about the cardboard box for the sensor, I just added that because it will be part of the finished bot, but you don't need it at this testing stage.

After the sensor is connected, we are ready to test.


Use the code below to test the ultrasonic range finder.

Lets connect all the motors and sensor to the Arduino so we can test the entire bot. Some of these wire connections may need soldering, to keep them fastened securely to the motor shield. 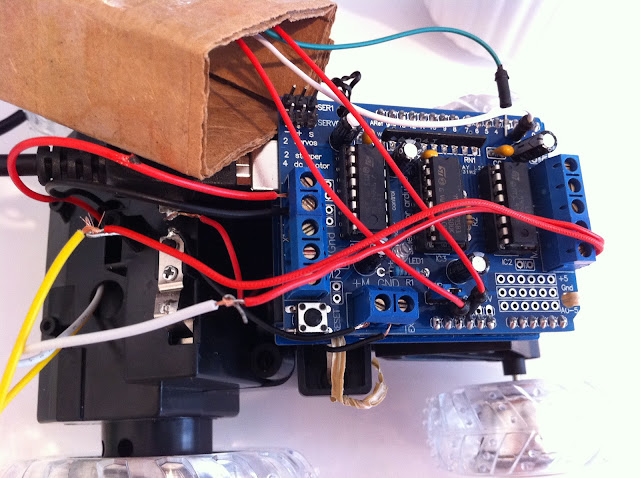 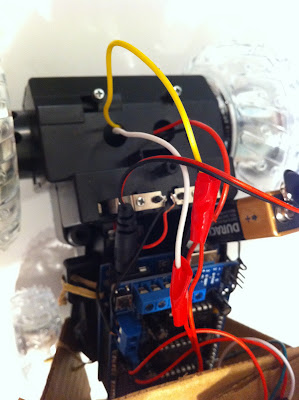 
This sketch will have the robot ping to find if there is an object within range.  If no objects are within range it will continue forward a small distance then ping again.  If an object is found it will perform a sequence of commands to try and avoid the object (move back, turn, etc.).  Then the whole process repeats in an infinite a loop.

Now with our final systems testing completed, we can attach the outer shell to the bot for aesthetics and let it run around.

With our testing complete, it's time to think about the robot's appearance.  Feel free to get really creative with this part.  I decided to use what I had laying around, some cardboard I scrapped from a box one of the Arduino boards were shipped in. One of the cardboard pieces had this 'V3' printed on it, so I thought it would look cool to have that on the front of the bot.

I cut out some pieces and came up with the rough design of what the bot will look like. I loosely placed the shell parts on the robot to see how they fit, there is a bit of trial and error here so don't worry if it doesn't look good right away.

Once satisfied with the shell, go ahead and attach it to the bot.  I mostly used scotch tape and twist ties to attach the cardboard pieces to the frame of the old RC car.  Since I didn't attach a switch for the 9v battery, I cut out a hole in the back for the battery  to be able to disconnect the 9v battery wires whenever it wasn't being used. 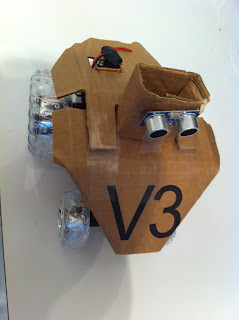 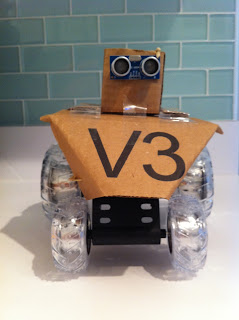 Now that everything was tested and assembled, it's time to let this little bot roam free and see what it does...enjoy!

As you can see from the video, the sketch definitely needs more tweaking...but the basics are there...It went forward, detected an object then reversed and tried to turn (probably should increase the turning time). Hope you enjoyed this tutorial and please feel free to post any questions or comments below.